I guess that’s one of the tricks of the trade- ask a question without really asking a question.  Make a statement that can’t not be responded to in some way, measuring the reaction to said statement…  “it can be very expensive having your own island…”  Really Mark? And what would you know of expensive?  You have lived off the largess of “Doc” Davis now for your entire adult life… have you ever made out even a rent check??

Oh no!  Jessica was supposed to keep Mark “busy” for longer than this!!  What’ll she do?!?  Once Mark has camping on his brain, there isn’t much anyone can do!  What shenanigans will Mark walk into?  What will Jessica Cannup do to keep Mark “occupied?”  This is certainly awkward…

Immediately I think Cubans, Haitians, Dominicans, illegals!  Will Mark Trail dip his nib into the inkwell of immigration??  Is Marlin scouting for Major League Baseball?? Does he get an extra bounty for promising southpaws??  So polite, he is, saying “excuse me please, Mark…”  The little ellipse at the end of that sentence, that little hesitation says it all- he’s up to NO GOOD.  Chores my arse…  Thanks Marlin, for letting us in on what you are up to, otherwise we’d all be wondering…

But dinner’s over and they didn’t even touch the mashed yams or whatever that bowl of orange glop represents… Shame.  Lots of nutrients in every bite!!

Not sure who is delivering what lines in panel two, since the camera pulled back to reveal the house from the vantage point of a 200 foot tall Magnolia tree…  But it’s been established that Jessica and Marlin are “Just Friends” and unless they are involved in some complicated joint tenancy arrangement, one is living at the pleasure of the other in the big house on this “private Island…”  But Mark knows all about that, right??

It’s nice to see that they use the same coffee cups on the island as they use at Lost Forest…  what a comfort that must be for Mark, better for him to regulate his caffeine intake and not spoil his sleep cycle…  Looks like we are having roast for dinner too!  We can see the bare top of the tied-off hunk-o-meat at the bottom of panel one.  And of course, with Doc at the hotel, Mark could leave both him and rusty there to just stare at each other, wondering what to do next.  Not that any compunction has ever been shown around leaving Rusty alone for weeks on end… But it’s comforting to know that Doc is on the job, helping to look after the little guy…

You couldn’t just throw the damn thing in the deep freeze, thaw it out later stuff it and paint it??  First clue as to what’s “going on” here… A Taxidermist turning down work… something’s “fishy,” all right…  “I am in the middle of a few other things?”  What on earth does THAT mean??

And sure, Mark, just come on in!  Nice of you to wrap the fish in brown paper and tie it up with string, otherwise there would be fish juices dripping all over the hallway rug!!  Or are we in the workshop, judging by the tool rack in the background of panel three?  “Caught a Big Snook” is code for, well, catching a big fish called a Snook.  Sometimes things are what they seem…

And from the Comics Curmudgeon:

While Jessica Canupp may turn out to be virtuous, I definitely remain convinced that her boyfriend Marlin is up to no good, what with his constant suspicion of Mark and now his refusal to help make Rusty’s dreams of a mounted, taxidermied fish looming over his bed come true. In unrelated news, I’m an unrepentant city slicker and thus have no idea how one transports a game fish to a taxidermist, but if panel two is any guide I guess you wrap it tightly in a neat cylinder of paper? My first suspicions were that Mark had brought a freakishly enormous baguette to his hosts for dinner, or perhaps a giant novelty cigar for everyone to enjoy afterwards.

Not only do they catch fish wherever they go, but they came back just in time for the turtle hatch…  and I could be wrong, but doesn’t that typically happen at night?  Or is it the laying of the eggs?  Oh, no matter, we are about to weave together all the intricately boring elements of this plot in hopes of making it moderately interesting…

And Rusty, how do you know of such things as mounting fish?  Or was it the chance encounter on the dock where Ed the line-tender was running his mouth??  I still missed the part where Rusty accompanied Mark back to the ocean, and now Doc is making his escape from Lost Forest and will be leaving Cherry all to her own devices, feeding the big dog and watering horses…  fun, fun!!

I don’t know where to begin…  What year is this??  Mark has his pipe clenched smartly in his mouth… doesn’t even have to take it out to talk!!  Look at his broad shoulders, bulging biceps and forearms, Superman should have such a build!!  I have no idea who the blonde haired lad is, but isn’t he crafty!  Filling Cherry’s head with visions of “that cute little blonde… Miss Chance…”  And Mark, did you really mean to say “I could be really entertaining” ??  “She’s a Real Honey?”  Just so you can go FISHING!?! 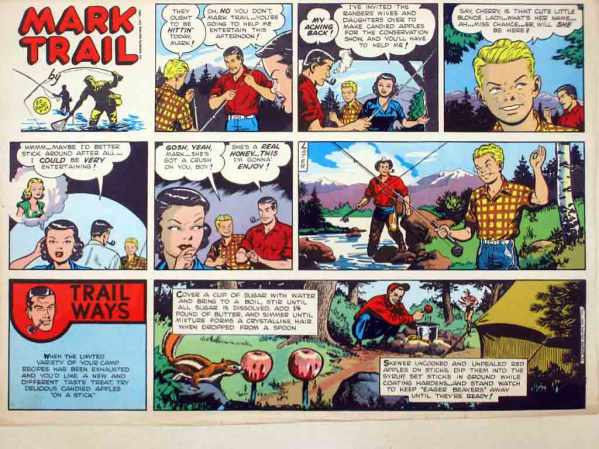 I guess back in the day Mark was a Sexual Beast!  Who knew!?!

Do Snook jump like Tarpon?  How knows? right??  Rusty is quivering with delight… he appears to be 8 years old again in the third panel, choking the life out of the creature that fought so bravely but ultimately succumbed to his Angling Prowess…  Based on what they are fishing for, I also realize that they are probably on the gulf coast of Florida… for those of you keeping track of their whereabouts…  And oh, I have more interesting news:  the 4.5 hour drive to Savannah or Charleston just turned into a 9 hour drive to the Gulf Coast.  I ask again (hopefully for the last time) how does Mark manage to commute to and from Lost Forest on this little Pelican caper???

But yes, all things considered, a big snore.  C’mon, Elrod, let’s get with the evil making here…  what do you bet that they take Mr. Snook in and have him filled with sawdust??

The Tarpon.  The fish that drove development to Southwest Florida.  The fish that, until the late 19th century, could not be conceived of being caught by rod and reel…  And so with the magic of the transitional / locational / time bending / plot moving box in panel one, Mark and Rusty are on the water…  fishing!  Remember the good old days, ladies and gents, when Mark would almost seemingly take fiendish delight in promising to take Rusty fishing, only to be called away on another “assignment?”  Well, that tension (alas) no longer exists and now he is not only wetting his line, he is traveling to fisheries that the common working man may never get to see in a lifetime… Do I sound jealous?  Maybe just a little…

I guess I will stop asking about the whole space-time conundrum…  The authors clearly feel they can violate those laws with impunity.  So let’s revel in the fact that Mark is offering up a modest fist-pump at the sight of Rusty hooking a Tarpon  (which seems to have turned the boat, or at least Rusty, around…) and wait patiently for this story to reveal its evil side…

As I may have pointed out, Mark is a good 4.5 hours away from Lost Forest right now- to be anywhere near salt water and Pelican habitat- yet he’s going to “take Rusty fishing” today?  Totally don’t understand that one…  and are we inviting Rusty to dinner, or does he go back in the trunk with the catch of the day?  And besides, Rusty who?  It’s not like Jessica has been introduced to the entire trail clan…

Oh, Marlin’s not going to be happy about supping with Trail.  Clearly Jessica has been drawn in by Mark’s outdoor nature writer wiles, and can barely resist him by standing there arms akimbo, chest thrust forward, asking him to dinner…  Rusty?  Rusty who??

So endeth the lesson…  Really?  I mean who the heck doesn’t know, by now, that throwing trash into the water is a big non-no??  But then I am reminded of my own experiences… going out bluefishing off the Jersey shore and watching the crew of the boat tossing can, bottles, cardboard, anything and everything off the back of the boat as we headed back in to port…  And the island of trash in the Pacific that is the size of Texas…

Mark is truly in his element here, judging by the look on his face in panel one.  “This story ought to write itself!” he must be thinking… But what evil lurks behind this eco-façade??  There must be something, otherwise why would Marlin and Jessica have exhibited such caution, bordering on paranoia??  We should know in a couple of weeks…